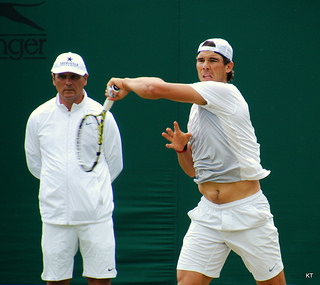 The results of a strong coach-player bond speak for themselves. Tony Nadal and Rafa; Steffi Graf and her father; Venus and Serena and their Father; The Bryan brothers and their Dad, Wayne Bryan.

These were not top level coaches, but they were able to get the most out of their children, or players, by building strong enduring relationships, based on the principle of embarking on the journey together, and agreeing to both be malleable and to learn together.

They agreed to build on the principle that there is no one sentence that can fix a problem, but hours and hours of tinkering, perfecting and earning a skill is what leads to mastery, not paying someone 100 dollars for their opinion.

I see to often players who jump around from coach to coach, feeling that they will be able to gain more through this process. I believe that a coach player relationship is just that, a relationship, built over time, with the same characteristics as any other healthy relationship, respect, trust, honesty and knowledge of the person down to their behavior patterns, their fears and their hesitations. A strong relationship with the coach means they will know what to say and when, when to let the student figure it our for themselves, and be able to talk openly about pertinent issues.

Parents looking only for technical expertise will often follow a path of believing that technically superior shots make the person a great competitor, when the ability to execute under pressure involves far more than this mastery.