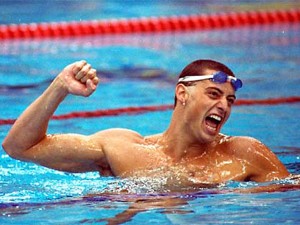 I had the incredible opportunity to pick the brains of Matthew Biondi, 11 time Olympic gold medalist in swimming, and member of the swimming hall of fame. We spoke about competition at that level, and what separated him from his peers.

I have dissected The conversation that we had, (Admittedly having to stop myself from being completely starstruck) into 6 main points.

FOCUS ON YOUR PROGRESS

Competition happens much less frequently than practice, and if you perfect the way you practice, are able to sink deeply into your practices in a similar way as you would to competition, then competition severs its purpose which is to "validate your process".

"I was able to be really focused and meticulous with my technique" You can be as meticulous as you want in this category, you can practice on court, off court, in your room and by visualization in your head.

YOU MUST BE ACCOUNTABLE FOR YOUR MISTAKES

In particular here he differentiated between his team and others, saying that his parents never softened the blow for him. They supported him, they listened to him, but they let him take responsibility fully for that which was his. He was given the freedom to figure things out for himself. He noted stories of friends parents who called the coach when someone was late, called to arrange different practice scenarios, pushed too hard and took their kids results personally.

He said his parents were very much in the supporting role, and avoided those pitfalls naturally.

FREE YOUR MIND IN COMPETITION

"THIS IS THE ONLY WAY YOU CAN ACCESS YOUR FULL SKILL SET!"

This one really jumped out at me. I had to ask the question "I think at some level everyone knows this, so how is it that you are able to do it so well and so frequently, when so many really struggle with a mind that is very noisy?"

He responded " Well, when you are consistently breaking world records in practice, it gets easier."

This floored me, because it shows just how hard he was pushing in practice, he was not just doing hos routine, he was treating it like it was the real thing, time and time again. This one goes hand in hand with the first one, his process was clearly incredibly focused and determined.

He told us a story of a time where his coach gave him a brutal medley of sprints to do in a certain time. The coach then brought all the teammates in and told them that they had all missed on the requirement. They repeated. He told them again that they had missed. They repeated. This went on a number of times until teammates were complaining, some quit for the day, some started making excuses.

He Buckled down and stayed until the job was done, going home exhausted but satisfied. That attitude of not quitting until you have achieved your goal for the day is so incredibly rare, most people are satisfied just far too easily, and will accept less than their best almost daily. Those are normally the people with excuses.

YOU MUST LOVE IT!

Going back to the story above. Chasing after a difficult goal, exhausted and frustrated was the most exhilarating feeling for him. Matt said that the one thing he could clearly see between himself and his friends was that he Absolutely loved being in the pool, more than those around him. He could see it and feel it.