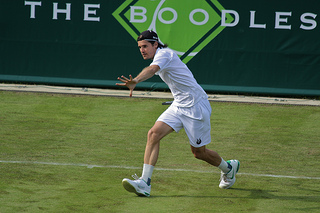 We are going to discuss some simple judgement errors that are common, even amongst the pros, but far more common as we go down from 7.0 to 2.5 through the USTA scale.

NEUTRAL PHASE is the foundation of the tennis game but when we talk about losing the neutral phase, we need to look at what I call the three P’s:  POWER,  PLACEMENT, court POSITION.

If you hit the ball into a comfortable zone 2 (knee to chest hight area where most people are comfortable and hit their best shots) and allow your opponent to hit POWERFUL shots, there is a risk that you will be moved to DEFENSIVE PHASE.

If you hit the ball in such a way as to generate a response that allows you time and space to accelerate your own racket head speed, you could then be on the brink of stepping up to OFFENSIVE PHASE.

Using the first couple of games to identify which shots are your opponents least favorite will allow you to start consistently placing the ball here.

This PLACEMENT lowers the risk of them hitting a POWERFUL  or well PLACED shot that could allow them to move up to OFFENSIVE PHASE. (If we think about Nadal and Federer here, we see how relentlessly Nadal uses his heavy high bouncing (zone 3) ball to Federer’s backhand. He is gambling that Federer will not be able to hit enough balls that are offensive enough to consistently win points from this location, a gamble that has paid handsome dividends over the years.

A simple list of most uncomfortable shots are the following:

I am frequently amazed at how little attention this particular topic receives. Most players focus on development of shots, technique and other situations, but don’t take the idea of being excellent at chosing shots that protect their court position.

They can also go back behind me more easily since I am moving faster meaning turning is more difficult.

This means I have created opportunities to be hurt for COURT POSITION, meaning the correct response is to go back cross court, unless these conditions can be met:

To round out this topic, it is important that PATIENCE is developed, as well as excellent finishing skills.

It is absolutely essential to be able to identify the phase of play, and to be able to be comfortable with a RESET from offensive to neutral to defensive and so on. Often we see a panic when someone has the opportunity to move to OFFENSIVE PHASE but their opponent defends it well, therefore re-establishing the NEUTRAL PHASE.

At this point, we need to go through all the steps we went through to create the offensive opportunity again, giving credit to the opponent for resetting the situation.

Someone who is adept at resetting the point, will be extremely successful, as most people will wish they had already finished the point, and become hopeful and agitated and possibly then try to force their way back to OFFENSIVE PHASE, thereby MAKING the error.

In order to not let the point be reset, we must be able to identify opportunities to move to OFFENSIVE PHASE, and be able to execute to three or four shots which should lead to the ultimate ending of the point:

When practice, try to ask yourself the following questions:

Have fun and enjoy thinking about this.