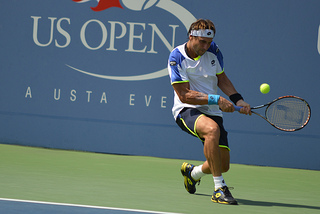 The counterpuncher is one of the more fearer opponents, and I have personally struggled many times against this type of player and see my students go through many of the same struggles that I did.

There is an important mental shift that you need to make when playing this type of player. You need to think like a businessman on some level.

So lets do a reality check of what is probably going to happen:

You must be aware of your skill set, if you normally make 6 out of ten big forehands, then you need to know going in that this is what you have to work with, don’t expect to make 10 out of ten and be frustrated when you miss.

Once you have your mind ready to accept these conditions, and you are prepared to go for 3 hours if necessary, now its time to impose your style on them with the goal of creating a small margin, 52 points won/ 48 lost, something like this, enough to get the win.

I hope this helps you with your preparation for your next battle with a counterpuncher. My final thought is that often, its YOUR ERRORS that they rely on for most of their points, actual errors, or errors in court position that they capitalize on.

So look to be mentally and physically disciplined for an extended period of time.