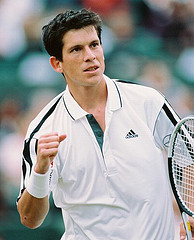 We are going to take a tactical journey in an attempt to make some short lists of the most important game styles and what each style relies on to make themselves successful. We will also take the time to analyze how each style matches up against the others.

What is Chip and Charge? It is tactic when the returner chips or slices the return and follows it in to the net.

We don't see players now using Chip and Charge tactic. With evolution of tennis racquets the serves now are just too big to be able to do it effectively.

To learn how to Chip and Charge this takes some practice, commitment and confidence. This tactic is equally effective in singles and doubles. If you want to use it be sure your opponent has a serve you can handle. If opponents serve too big, then this may not be the right tactic to use.

Note on the video: Connors was not always a hit and charge player, but he is using the tactic in this match against Agassi as his primary tactic. Fun to learn from. We have a couple of players who are working on the more compact backhand stroke, flattening it out and taking it really early. Here we can learn from one of the masters of the Game, doing it brilliantly. P.S.. Connors is the old guy!!