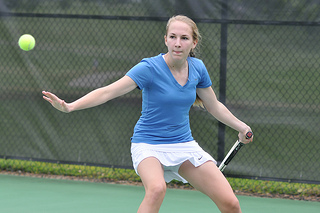 The best athletes are extremely good at making the most out of every practice session, regardless of the person on the other side of the net, by playing a game inside their heads while in action.

Some of my favorites are as follows:

1. STREAKS: see how good your concentration is by trying to win as many points as you can in a row, give yourself a goal and see if you can reach it, eg. "Lets try for ten in a row".

2. TACTICAL STREAKS: Attempting to come to net ten out of the next fifteen points, attempting to create a forehand inside out and really pull the trigger, checking to see how many big forehands you make from 10 attempts.

3. CONSISTENCY: Playing an entire afternoon not going for one winner, working on split step timing, discipline, depth and longevity in a point. I feel like this is a wonderful way to learn how to read opponents, because when you do this, you see when your opponent get desperate, you see when they go for too much, or when they lose concentration, which shots land you in trouble and much more.

4. POINTS OVER TIME: This one tends to upset opponents, but is useful nonetheless. Working on winning games in as short a time frame as possible, my record for a set is 8 minutes. especially useful if you are doing the ladder, you can be done and on to the next opponent in a ruthless and efficient way. Very good for learning how to control the tempo, how to be aggressive without overdoing it.

5. HANDICAPPING YOURSELF: Using only the slice backhand is one of my favorites, or using only a defensive forehand, and forcing yourself to go for winners only on your weaker wing.

6. DEFENSE: I consistently ask players what their favorite defensive drills are, and they look up at me as if I have gone completely stark raving mad! One of my favorites is to bring the person in, and then pick a target for the pass, purposely giving up the short ball and then trying to pass accurately.

There are hundreds more, and I would like to hear from some of you what you think about during points play or drills with weaker opponents? Lets start a dialogue!